All About Miniature Schnauzers 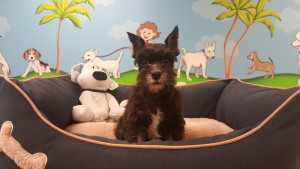 The Miniature Schnauzer is a breed of small dog of the Schnauzer type that originated in Germany in the mid-to-late 19th century. Miniature Schnauzers developed from crosses between the Standard Schnauzer and one or more smaller breeds such as the Poodle and Affenpinscher, as farmers bred a small dog that was an efficient ratting dog. They are described as “spunky”[1] but aloof dogs, with good guarding tendencies without some guard dogs‘ predisposition to bite. Miniature Schnauzers are recognized in three colors internationally: solid black, black and silver, and a color known as ‘salt and pepper’. There is a controversial fourth color variant in Miniature Schnauzers, pure white, which is not recognized universally.

The breed remains one of the most popular worldwide, primarily for its temperament and relatively small size. As of 2013 it is the 17th most popular breed in the U.S.

The earliest records surrounding development of the Standard Schnauzer in Germany come from the late 19th century. They were originally bred to be medium-sized farm dogs in Germany, equally suited to ratting, herding, and guarding property.[1] As time passed, farmers bred the Standard Schnauzer into a smaller, more compact size for ratting by combining it with the Affenpinscher and Miniature Poodle.[1][3] The first recorded Miniature Schnauzer appeared in 1888, and the first exhibition was held in 1899.[3][4]

Miniature Schnauzers are often described as non-moulting dogs, and while this is not entirely true, their shedding is minimal and generally unnoticeable. They are characterized by a rectangular head with bushy beard, mustache and eyebrows; teeth that meet in a “scissor bite”; oval and dark colored eyes; and v-shaped, natural forward-folding ears (when cropped, the ears point straight upward and come to a sharp point). Their tails are naturally thin and short, and may be docked (where permitted). They will also have very straight, rigid front legs, and feet that are short and round (so-called “cat feet”) with thick, black pads.[5][12]

The American Kennel Club breed standard describes temperament as “alert and spirited, yet obedient to command… friendly, intelligent and willing to please… never overaggressive or timid.”[5] Usually easy to train, they tend to be excellent watchdogs with a good territorial instinct, but more inclined toward barking than biting. They are often aloof with strangers until the owners of the home welcome the guest, upon which they are typically very friendly to them.[16]

They are highly playful dogs, and, if not given the outlet required for their energy, they can become bored and invent their own “fun”. Miniature Schnauzers can compete in dog agility trials, obedience, showmanship, flyball, and tracking. Schnauzers have a high prey drive, which means they may attack other small pets such as birds, snakes, and rodents. Many will also attack cats, but this may be curbed with training, or if the dog is raised with cats.[5]

A UK Kennel Club survey puts the median lifespan of Miniature Schnauzers at a little over 12 years. About 20% lived to >15 years.[17] While generally a healthy breed, Miniature Schnauzers may suffer health problems associated with high fat levels. Such problems include hyperlipidemia, which may increase the possibility of pancreatitis, though either may form independently. Other issues which may affect this breed are diabetes, bladder stones and eye problems. Feeding the dog low- or non-fatty and unsweetened foods may help avoid these problems.[18][19][20] Miniature Schnauzers are also prone to comedone syndrome, a condition that produces pus filled bumps, usually on their backs, which can be treated with a variety of methods.[21] Miniature Schnauzers should have their ears dried after swimming due to a risk of infection, especially those with uncropped ears; ear examinations should be part of the regular annual check up.[22] Miniature Schnauzers are also prone to von Willebrand disease (vWD). vWD in dogs is an inherited bleeding disorder that occurs due to qualitative or quantitative deficiency of von Willebrand factor (vWF), a multimeric protein that is required for platelet adhesion.[23]

Schnauzers have a specific groom cut that is standard among the Schnauzer breed. Schnauzers require regular grooming, either by stripping (mostly seen in show dogs), or by clipping (a short-cut usually reserved for family pets). Stripping removes the loose, dead coat; it may be done by hand, called finger stripping, or plucking, or with a stripping knife; either way, it is a laborious process. Many Miniature Schnauzers who are family pets have regular grooming appointments to have their hair clipped; clipping, using a mechanical clippers (or shaver), produces a soft, silky, skin-close trim. Whether stripped or clipped, the coat is close at the body, and falls into a fringe-like foundation on its undercarriage, called furnishings, which can be left to grow, but must be combed regularly. All Schnauzers, whether they are Miniatures, Standards, or Giants, often sport a beard, created by allowing the hair around their noses to grow out. Left unclipped or unstripped, the body hair will grow two to four inches, and will often tangle into mats and curls.[10]

Thanks For Reading:
All About Miniature Schnauzers